On the pavement road, intervening on 40 kilometers, 130 full roads involved 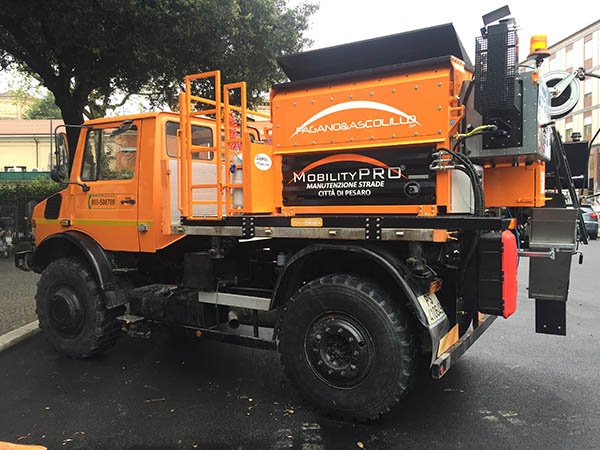 20/05/2016 – Matteo Ricci cones the new hashtag (#menobuchepertutti), launches the road maintenance plan (“historic”, comment) and does not surplace: “There are 40 kilometers of asphalt: 130 roads. Eight times as much as 2015, where miles were 5. We also asphalt the controversy. ”

It starts on Monday with the center-sea area. It will take place until November, “on all neighborhoods. With four companies involved in downtown, urban roads, external roads and porphyry (Nasoni, Di Eleuterio, Assisi Strade, Doma). Along with Enzo Belloni, the mayor confessed: “The holes and the mayonnaise are at the center of all the Pesaro discussions. They tell us, ‘Do the bicycles? First the holes! The Ball Place? Close the holes! The schools? There are the holes! ‘ Well: Monday is the largest ever ever seen for decades on the streets. For investments, we will also combine the new hot closure of the Mobility Pro (with the thermocontainer, ndr). That’s why we are asphalting the controversy. ”

Some of the ways out of the way will be settled with the rebates: “Within the 130 arteries there are 10 which we will intervene in 2016. On another 20 maintenance will be done in 2017. A good hand also for the local economy.” It starts, by accident, from viale Marconi and avenue Trento, “because we want to conclude before the summer season all the investments that have had a direct impact on tourism. On Sunday, we inaugurate the Republic Avenue bicycle. Next Saturday the new square at the Ball. On Sunday, May 29, the Bay Bicycle. Starting immediately we trust to close also on these two important hinges. To present us with the finished part of the sea. Almost”.

CICLABLES – Not only asphalt roads on viale Marconi: “From Viale Trieste to the State we will also set up sidewalks, make the bicycle and change the lighting. In the stretch between the State and the Partisans Avenue, a yard site of the old palas, we will be interviewed when the renovation of the hangar is over. ” Note Belloni: “The roads? Select with the neighborhood co-operation. We were not pulled for the jacket by anyone. ” At times: “There is a logic about the tourist aspect of the sea and traffic flows to other areas. Upon completion of the school year, we will encounter situations in conflict with student transportation, such as via Gramsci and via Don Minzoni. To understand, the porfido of Via Mazzini will take precedence over other roads: the Mengaroni is near and we can not work in open schools. Obviously we will not arrive anywhere. In general, however, the answers will be important. And in many cases, besides the streets, the sidewalks will also be fitted. In viale Marconi the bicycle will be on the road side between Trieste avenue and Trento Avenue. Then he will return to the sidewalk from Trento Avenue to the State. ”

PANCHINE – In the mailbox on the margin, the mayor seems to appreciate the debate-monstre on the benches of Liberty Square. Yet open to him: “I knew how to do it, posting on facebook. In fact, the numbers are amazing, with over 50,000 postings displayed only on my page. ” He explains this: “The fact that he is talking about, in any case, emphasizes the commitment made to the work. That’s a bit our communication goal. ” For the rest, “I liked those with winged lions. Architects have chosen these, more closely linked to the avenue of the Republic. I’m the administrator, not the technician. Everyone has his profession: one must also trust. In any case, it was crazy advertisement. On Sunday we will inaugurate the boulevards of the Republic Avenue, but there will be the queue to go to the benches … “.

From the Municipality of Pesaro
www.comune.pesaro.pu.it

This site uses only functional technical cookies and Google Analytics for anonymous statistics. You can accept / reject everything or manage your preferences. If you close the banner, no cookies will be activated.

This site guarantees that personal data will be processed in accordance with the legislative provisions of the Regulation and the confidentiality obligations envisaged.

Strictly Necessary Cookie should be enabled at all times so that we can save your preferences for cookie settings.

If you disable this cookie, we will not be able to save your preferences. This means that every time you visit this website you will need to enable or disable cookies again.

This website uses Google Analytics to collect anonymous information such as the number of visitors to the site, and the most popular pages.

Please enable Strictly Necessary Cookies first so that we can save your preferences!